It’s amazing how many different sizes and shapes of antlers come in. From the smallest to the largest ones and even the ones in between, there are many different shapes. But, what’s inside them? What makes them so unique? Let’s find out.

First, antlers are cartilage layers that eventually turn into bone. Antlers are made of bone and are protected by a velvety skin, which is basically a vascular skin and is designed to get as much blood and oxygen to the antler’s buttons so that it can grow properly.

In the cervidae family, antlers are derived from a bone-like material that regenerates each year and branches out having different points. Deer, moose, reindeer, Caribou, and elk all have antlers growing on their heads.

What are Antlers Used for?

Although antlers are beautiful structures, they are used for a variety of purposes in addition to being attractive. Find out what those purposes are.

The antlers of male deer are used as weapons by them to compete with other males for leadership positions or to gain possession of breeding females. They are also used to shovel snow off the ground.

Apart from this, reindeer help them find food and act as a protective shield for deers when they are attacked by predators; they help males to fight with certain predators, for instance, cougars. They also use their antlers to protect female cervids from predator attacks.

What’s Inside an Antler?

A completely boneous tissue, antlers are shed annually, but during the period of growth, they are covered by a velvety epidermal covering. They also contain calcium, phosphorus, and as 50 percent of water which helps them in growth and nourishment.

Antlers are basically the combination of hardened bone and the spongy bone that probably provides more flexibility to deer while fighting with predators.

However, this structure antlers do not grow on deer from birth. Male deer reach their puberty when they develop the permanent base of their frontal bones, called a pedicle. Pedicles undergo several stages of development before they are sturdy enough to anchor antlers.

After reading about what antlers are made of, let’s determine if they are hollow like horns or solid like bones?

This amazing structure grows from the tip of the cervides and is composed entirely of bones making them solid and dense and not hollow. Unlike horns which are made of a substance called keratin and hollow, antlers are made of bone that makes them hollow.

But they are not born with hollow antlers, and once the pedicle has grown to the height of 2 cm, the deer will begin growing its first antler bud. A deer’s antlers are actually deciduous horns; these are bones that grow into dead bones once they have fully matured. 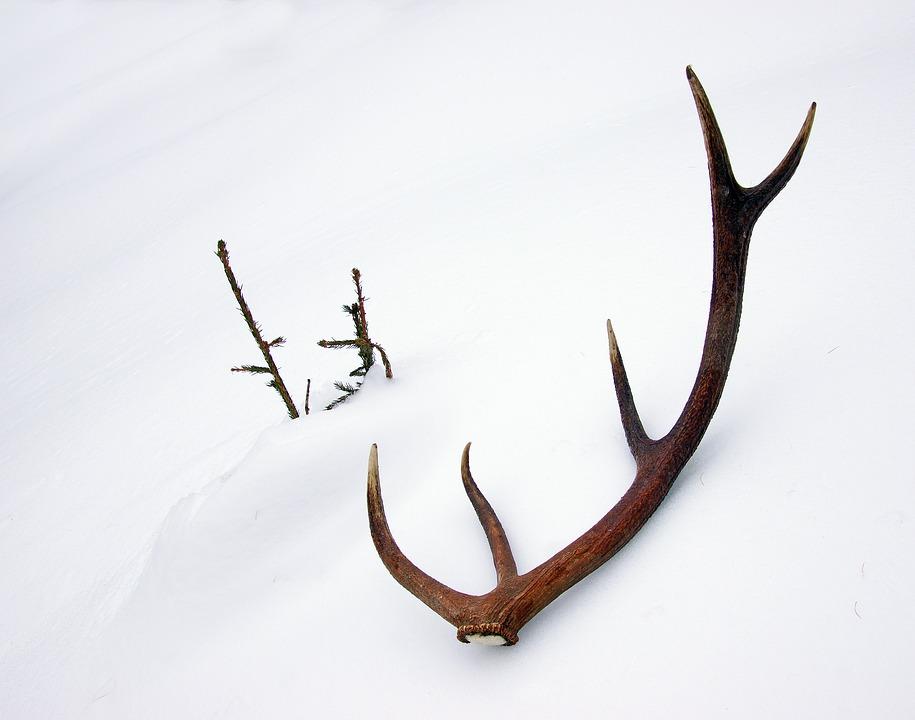 A horn is indeed hollow, but what about antlers? Are they hollow or made of solid bone? Let’s figure that out.

In their fully developed forms, antler bones are solid, without any epidermal covering. However, young antlers are not solid and rather covered with leather-like skin that appears velvety.

Although the bones of antlers are pretty solid, when antlers are fully grown, the bone loses its texture and is considered dead.

How are Antlers Different from Horns?

Horns and antlers are both extended skulls of an animal, having no sensation in particular and serving the same purpose. But, this doesn’t mean they are the same, they are different in many ways, which we will explain further,

Another remarkable characteristic of antlers that distinguishes antlers from the horn is that they’re primarily present in females; on the other hand, horns are present in both male and female counterparts.

Do Antlers Count as Horns?

We often see antlers and horns used interchangeably, but are they the same thing? Do antlers truly count as horns? Let’s find this out.

The antlers are horn-like protrusion found on deer or similar animals of the Cervidae family, but they are not horns. While horns are a permanent body part of the Bovidae family, antlers grow and shed every year. Antlers, however, are branching structures that stand out from male skulls, unlike horns.

Horns are permanent bones, covered with keratin, and are generally small in size; however, antlers are temporary bones covered with velvety skin that grows at an incredible rate.

Are Antlers Bone or Keratin?

Since horns are covered entirely of keratin, this makes people think that antlers are also made of keratin. But this is not the fact.

Antlers are made entirely of bones; there are no traces of keratin in antlers. Instead, they contain a protective layer called velvet that supports the growth of antlers by transferring oxygen and blood.

One of the unique things about antlers is they are made of real bones, unlike horns which are said to be made of fake bones. Additionally, these bones fall off every winter season and regrow during mating season, making their growth even more unique.

Why Do Antlers Have Velvet?

Having discovered the structure of antlers, it is quite clear that the bones of antlers are protected by velvet skin, but why antlers need velvet is still unexplored. Check it out.

During development, antlers are protected by ‘velvet,’ a thin layer of skin and blood vessels that provides oxygen and blood to the antlers. After the antlers reach their maximum size, the velvet falls off.

So, just like keratin protects the horns in bovides, velvet is meant to protect the antlers. However, unlike horns, it is only there in the primary stage, in full-grown antlers, the flow of blood to the velvet is cut off, and both the velvet and antler die. When this happens, the deers scratch to remove the velvet by scratching on other surfaces.

Horns of cows and of other bovid animals commonly bleed because of being soft and sensitive, but what about animals having antlers? Do they also bleed?

During growth, antlers are covered with a soft layer of velvet, which is a dark brown material underneath the skin. If an antler is knocked against a tree while in velvet stage, it will bleed.

However, when antlers are fully-grown, i.e., after four to five months, the velvet layer mineralizes into a bone and becomes hard. Thus, when they reach their final stage of development, they become hard and do not bleed even when they shed off.

What is Moose Antlers Made of? 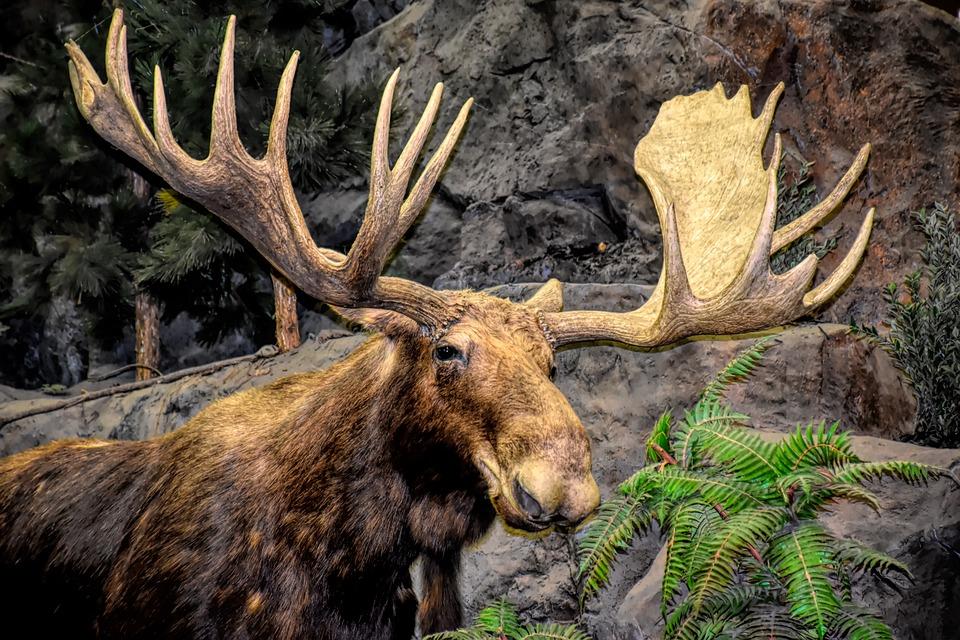 Being the largest living animals of the Cervidae family, they resemble the human’s hand palm and are unique in every aspect. All of this makes people curious to know what exactly they are made of. Let’s figure out the composition of their antlers.

In addition to having the largest set of antlers, they also grow and dry off the same way as the antlers of other deer species. Since the antlers of moose contain a lot of nutrients, once they dry and fall off, small creatures like squirrels or rodents eat them to gain nourishment.

What are Caribou Antlers Made of?

Caribous are known for being resistant to even the coldest temperature of the Arctic tundra; this makes their body structure and antlers different from others. Let’s figure out what’s inside the antlers of these animals.

Similar to any other deer family members (Cervidae), caribous antlers are also made entirely of bone and are covered with soft furry velvet till the time they grow fully. 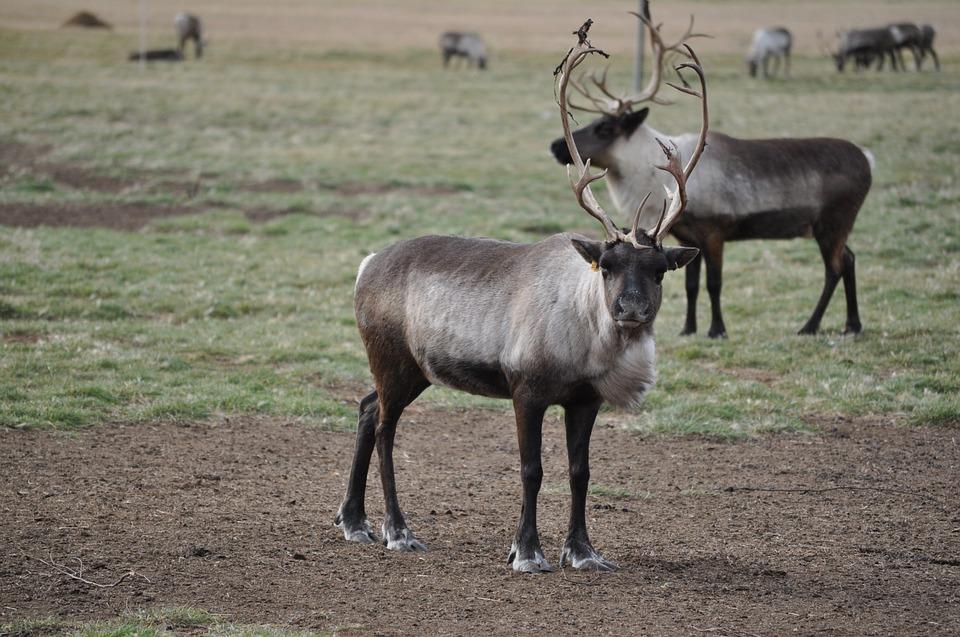 What is Unique about Caribou Antlers?

Till now, it is clear that only male members of the deer family (Cervidae) have antlers, but does that include Caribou as well?

The most interesting antler trait in Caribou is that they have a unique brow tine in one of their antlers that protects their face while fighting with predators. Also, the fact that Caribou are the only deer family where both males and females can grow antlers, making them the most unique among other types of deer species.

But, antlers of females are smaller than their male counterparts; they do have a pair of unique antlers that can be carried for a longer period. Likewise, species of other deers males, caribou males, also fall off their antlers after the mating season ends.

Moreover, female members continue to have them till the time they give birth, and this is because antlers will help them defend themselves and their fawns from predators.

What are While Tailed Deer Antlers Made of?

Being the smallest member of the deer family, white-tailed deers have unique body structures as well as the antlers.

In the whitetail deer antlers, you will find the fastest growing bone in the animal kingdom. During the course of a day, a deer antler can grow as fast as half an inch and reach its maximum before drying and shedding off in winters.

White-tailed deer antlers continue to grow till the age of eight years. Various factors like age, nutrition, hormones, and genetics determine the growth of antlers.

What kind of Antlers Do Moose Have?

If you examine moose antlers closely, you’ll see that their shape is rather unusual; not only are they asymmetric, but the palates are also different. Let’s find out what kind of antlers they have that makes them so unique.

Antlers of moose typically grow in one of the two shapes: shovel shape and pole shape, with long needles or points. Probably, this is why their antlers are considered as one of the most unique and attractive.

Is a Reindeer Antler a Bone?

Being the only deer species that is domesticated throughout the world, reindeers have quite a unique body structure and antlers. Let’s find out if their antlers also consist of a bone.

Reindeers and Caribou are both the same animals; they are known as reindeer in Europe and Caribou in North America. Both male and female reindeers can grow antlers, and it is composed entirely of bone.

Is it Safe for Dogs to Chew Antlers?

High-quality antlers not only promote good dental health in dogs. They also provide dogs with high amounts of iron, calcium, and potassium, making them completely safe to consume and digest.

Antlers are a unique structure made of bones and other substances like cartilage, fibrous tissue, skin, nerves, and blood vessels. Usually present in deers, these attractive antlers grow and shed each year.