Due to its high nutritional value and delicious taste, hay is the popular fodder among cows. But do you know how they eat hay? Is there any unique method for that? 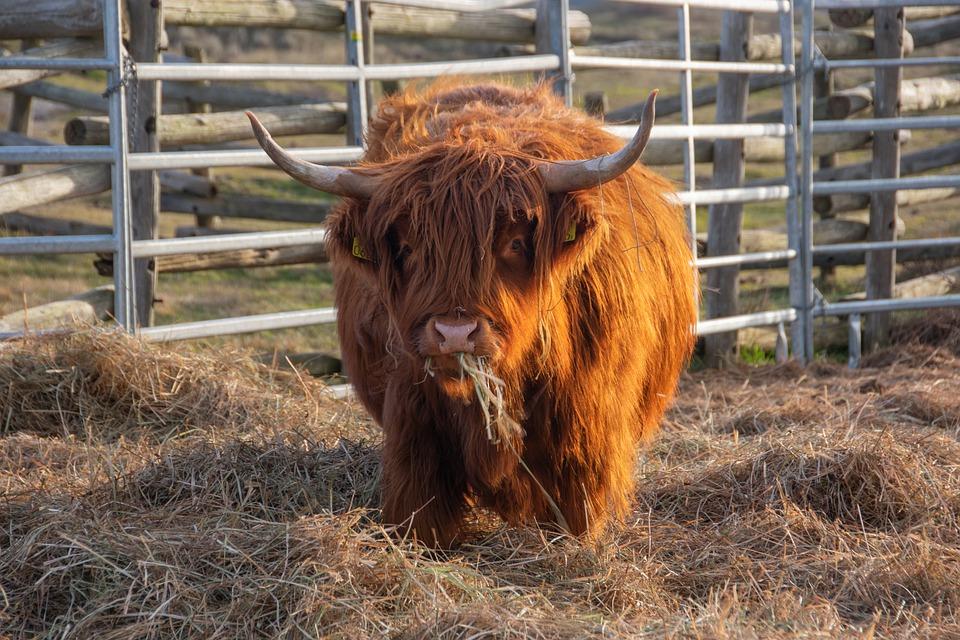 How Do Cows Digest Hay?

Because hay is the most nutritious feed, it is also the most concentrated source of protein and minerals, which makes it difficult to imagine how cows digest it? Let’s find out.

To deal with the cellulose that cows eat, they have a large stomach with four compartments, the largest being the rumen. Various sections of the rumen, reticulum, omasum, and abomasum make up the stomach. Each section absorbs nutrients and vitamins, breaks down proteins, facilitates digestion, and dissolves material to allow it to pass.

Do Cows Prefer Hay or Grass?

If you’ve ever seen cows eat grass one day and hay the next, you may have wondered which is their favorite. Do they also have preferences like humans? Let’s take a closer look.

A cow usually prefers grass over hay. This is because hay is a dried form of grass; thus, it is not as moist and juicy as grass. Also, grass tastes much better than hay, making them the preferable feed among cows.

In winter, there is less fresh grass available; therefore, hay becomes the preferred food of cows. Secondly, grass during winters lacks essential nutrients and roughage; thus, eating hay during these times becomes a necessity for a cow.

Certainly, fresh-cut Hay has proven to be fatal for animals, especially horses, but what about cows? Can cows eat fresh-cut hay, or should you wait for a few weeks before giving them hay?

It should be fine to feed the new hay as long as it has been adequately cured. If the hay is cut and bagged in perfect conditions with less percentage of moisture in the bale, it can be fed straight away.

It is recommended that you give freshly made hay after a period of anywhere between two and eight weeks before feeding it to your cattle, as this allows a process called curing to take place. Basically, this enables the sugars and fermentation process to settle to a safe level before feeding so that colic is avoided.

This is why it is suggested that hay that has been baled very dry at low moisture levels should not need to go through the fermentation process and is ready to eat for cows. However, since it is difficult to ensure that it is baled at this moisture level, usually, cow owners avoid feeding them fresh hay.

Animals tend to eat more than they need, but what about cows? Do cows eat as much hay as they need? Do they overeat hay because it is their favorite food? Let’s find out the answer to all such questions.

Whether cows overeat hay or not will entirely depend upon the quality of the hay; when hay is of high quality, then it will be highly digestible and move quickly through the digestive system, in this case, cows will eat more hay. Similarly, when the nutrition content of hay is extremely low this is also when the cow will overeat the hay to fulfill her nutritional requirements.

Overeating is common in calves or lactating cows, since they have fast digestion and require more nutrition than adult cows. Usually, adult cows stop eating when their rumen is full or when they feel satisfied.

Hay is prone to growing mold, especially in the winter, and eating completely moldy hay can be fatal for animals as it causes respiratory and digestive issues. However, is this also true for cows? Let’s find out.

Most of the time, mouldy hay shows adverse reactions to other animals, but cows aren’t that sensitive to it and it won’t hurt them. However, it can be a reason for abortion in cows, so be cautious while feeding your cow moldy hay.

Moldy hay produce mycotoxins, meaning they are highly toxic to animals. In horses, moldy hay is more likely to cause intestinal and respiratory complications, including heaves and colic.

Moldy hay isn’t as detrimental to cattle as it is to other ruminant species, although moldy hay can still cause mycotic abortions in cattle. Ruminants are also susceptible to reduced fertility, reduced feed intake, weakened immune systems, and even death from moldy hay.

However, you can take some precautionary measures while feeding moldy hay to your cattle, some of the most prominent among them is to use a high moisture feed, feed in an area where there is good airflow or wet the hay before feeding it.

Can A Cow Live On Hay Alone? 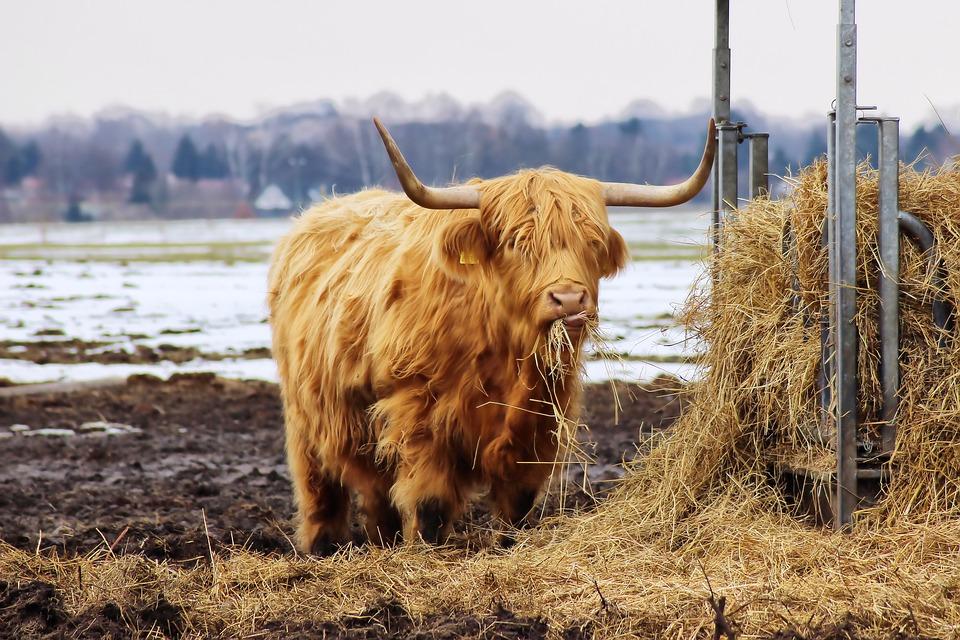 The feed for cows typically contains grasses and legumes, both annuals and perennials. But since the feed is not available all the time, is it possible for cows to live on hay alone?

Hay is an excellent source of nutrients for animals since it contains a multitude of vitamins and minerals; thus, cows can undoubtedly live on hay alone. When no other source of feed is available, especially during winters hay is the only source of feed available for cows to eat.

How Long will a Round Bale Last A Cow?

We all see the huge round bales of hay on cattle farms, but do you ever wonder how long they will last a cow? Let’s find out whether those bales last for months or only a few weeks.

Round bales of hay will last no more than for a week. However, if there is no wastage, then it could last for around 15 days and more. The hay is wasted after it hits the ground. Once on the ground, it is either urinated on or used as a bed and not eaten.

What to Feed Cows When There is No Hay?

There are possibilities when you run out of hay stock and wonder what else you could feed your cow. Actually, there are not one but many options of food to feed your cow when there is no hay.

Feeds like corn and soybeans, citrus pulp, almond hulls, or soy hulls, as well as a byproduct, feeds like cotton seeds and soybean hulls, are the best alternative when you run out of hay. Additionally, you can also offer wheat straw or sorghum-Sudan to cows.

The cows’ diet should be varied, and a combination of forage and concentrates will make them feel full and satisfied. Corn and Soybean is considered as the best feed for cows because they are full of proteins and other vital nutrients.

How Many Times A Day Should You Feed Cows?

Cattle owners wonder how many times a day they should feed a cow, considering her enormous size and complex digestive system. Let’s take a look.

It is recommended to feed cows three to four times a day. However, if your cow is pregnant or lactating, you should feed her at least five times a day, which will help her maintain her weight and nutrition.

The amount of food you should feed a cow also depends upon her breed, age, health, and other factors. For instance, a sick cow will eat less than a healthy cow. Similarly, older cows eat more than a two months calf. So, depending upon their nutritional needs, you can feed them for not more than five times a day.

Is Wet Hay Bad For Cows?

You must have seen cows eating bales of hay that usually get wet due to rain, snow, and fog. But is it healthy for cows to eat wet hay? Let’s get deeper into it.

Heat can occur inside haystacks and bales if there is too much moisture, which reduces the overall nutritional value of the hay; thus, it is not a good food source to feed cows.

How Do You Keep Cows From Wasting Hay? 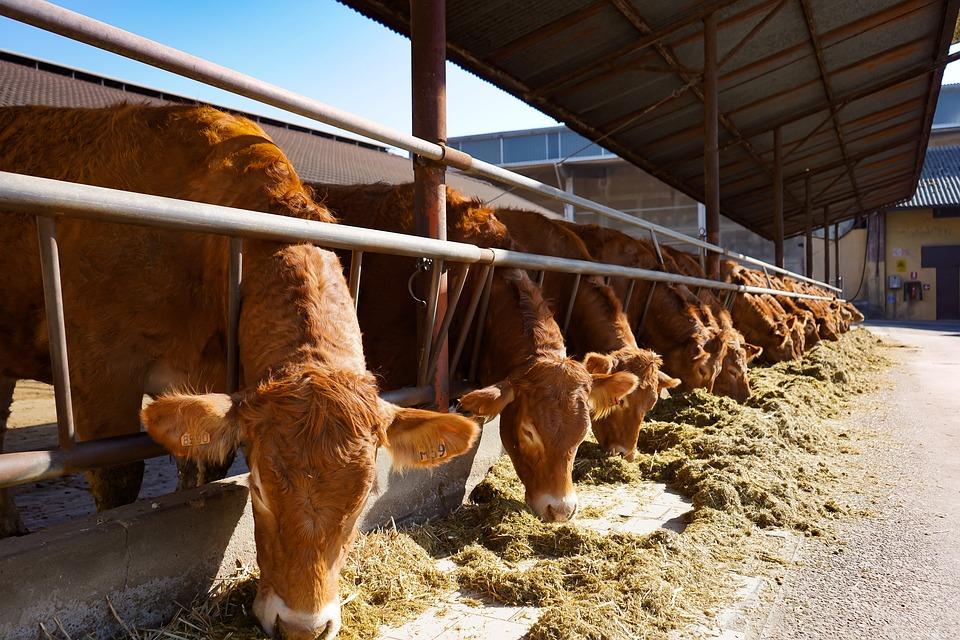 When a cow or a herd of cows eat hay, nearly half of it falls to the ground and ends up being spoiled. Since hay is becoming more expensive every year, what can be done to ensure your cows don’t waste it?

Using Hay feeder is the best way to keep your cows from wasting hay. When feeding large bales of hay, the feeder acts as a barrier between hay and a bale, thus reducing wastage. This is especially helpful when you feed the large bale of hay, particularly round bales.

What Kind of Hay Do Cows Eat?

Many kinds of hay are sold on the market, some for horses, others for goats. The question of what kind of hay cows eat becomes the most frequently asked one. Let’s find out.

The kind of hay cows eat will depend on whether they’re mature beef cattle, calves, or dairy cows. Generally, mature beef cattle can survive on the hay of any type, but they require adequate protein when lactating. However, due to their tiny mouths, younger cows will prefer eating alfalfa.

Unlike beef cows, dairy cows produce more milk, which means they must have the most nutritious hay possible. This is why they are fed with timothy hay during the lactating period.

Cows hay is the most essential feed for cows, as they are full of nutritions, it helps the cows to remain healthy and fit. There are various types of hays available and all of them serve different purposes. However, before feeding your cow any particular type of how you should know consult the vet.