Hereford cattle are a popular breed of beef cattle that have been around since the 19th century and were originally bred in Herefordshire, England, hence their name. Even though herefords are the most popular breed worldwide, they are known to have various disadvantages. Read below to know more about them.

Hereford cattle cannot handle extreme weather conditions, and are susceptible to eye cancer. Also, they can easily get sunburned and are also prone to vaginal prolapse due to their pale udders.

Although there is no denying the fact that Herefords cattles have various qualities like they live longer and are excellent mothers. These cattle reach maturity much earlier than cattle of the brahman breed, they still possess various disadvantages that cannot be ignored.

Here’s the history of Hereford cattle, including how they came to be in the United States, how they’re different from other breeds, and why they’re so well-adapted to the climate in America. If you own Hereford cattle, read on to learn more about your animals’ background! 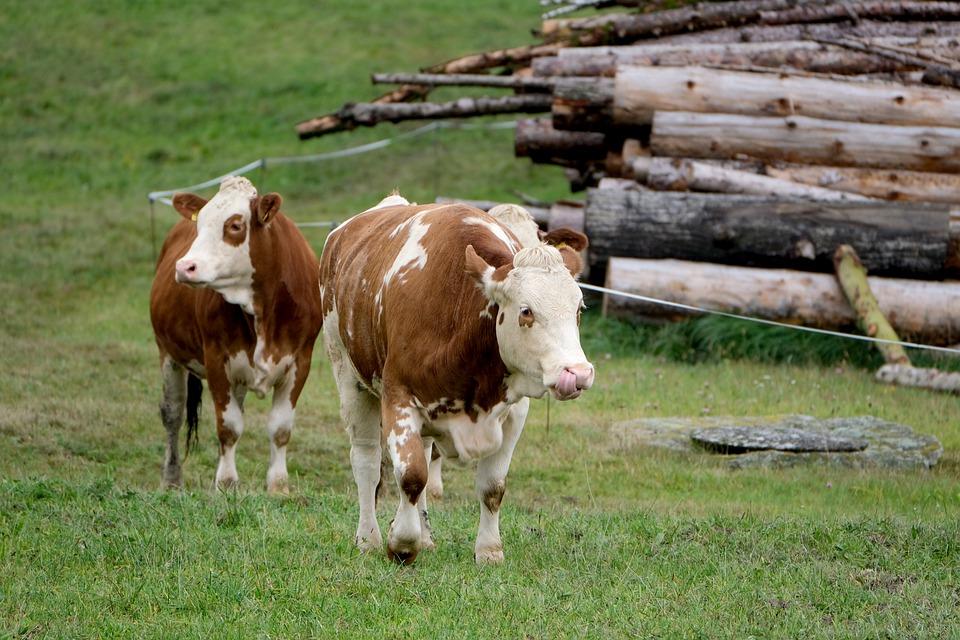 Hereford cattle, affectionately called Whitefaces, were probably crossed with black cattle of the Welsh and red cattle of the Britons during the Roman period but the origin of hereford cattle has always been a controversial issue, their place of origin, their date of origin have been questioned. Let’s find this out.

In the 18th and early 19th centuries, other cattle (primarily Shorthorns) were used to create Herefordshire cattle. Until the 18th century, Herefordshire cattle looked like many of the cattle of southern England, with their red coats and white switches, similar to the modern North Devon and Sussex breeds.

Hereford cattle are also commonly used in rodeos to tame bulls. While Hereford cattle can do well on pasture alone, they also thrive when raised on high-quality feed as well.

Despite their size, Hereford cattle are not aggressive. In fact, they are very friendly towards humans, making them ideal for bull riding. They obey instructions easily, which makes them easy to work with.

However, they can turn aggressive particularly when it comes to defending their young, as well as their food and territory. Also, even though hereford’s are friendly, they can become angry if someone tries to scare them, hit them, invade their privacy, or torture them. In that case, they show their aggressiveness by kicking, snorting and raising their ears.

The key to raising any herd animal is socialization from an early age, and Hereford cattle are no different; if you want your Hereford to grow up to be sweet and sociable, you’ll need to raise them from the time they’re calves until adulthood so that they don’t become defensive of their space or food. 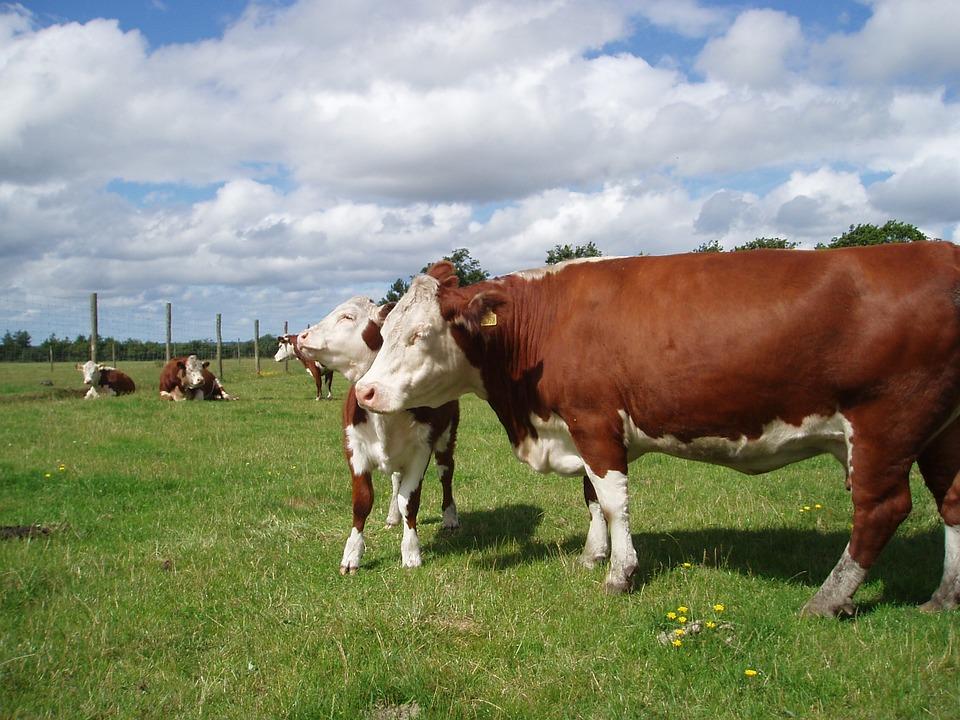 If you’ve ever visited the state of Texas, you might have seen some Hereford cattle grazing in someone’s backyard or along the side of the road, and perhaps wondered why this breed of cattle is so docile and gentle. If you’re interested in learning more about this famous type of cattle, keep reading to find out more about why Hereford cattle are so docile.

Hereford cattle are known for their docility, making them easy to handle and work with. Their good temperament and obedient behavior plays a crucial role in the safety of farmers while working with them on fields or even makes it easy to raise them as a pet.

Of all domestic cattle breeds, none is more famous or recognizable than the Hereford. Their trademark white face makes them visually appealing, but that’s not their only claim to fame.

They are also one of the most docile breeds in existence; even newborn calves can be handled by inexperienced humans without fear of getting hurt. But, why is that?- While some people believe this docility stems from the breed’s history on English farms, others think it has more to do with their genetic makeup.

However, they need to be trained adequately and with care. Mishandling, poor training, inadequate enrichment can make hereford really angry and difficult to handle at times.

A popular breed of cattle, Herefords are bred for their docility, ability to adapt to extreme weather, as well as their unique physical characteristics. Read below to know the unique physical features of the breed.

The Hereford breed, originating in Herefordshire, England, is known for its iconic white face and red-and-white coat. The red may also extend to other parts of its body. Additionally, Hereford cattle are generally smaller in size and frame compared with many larger breeds.

Herefords are a hardy breed that adapt well to a wide range of climates. They thrive on land with little rainfall and fare well in dry environments, too. With traits like these, it’s no wonder that Herefords are some of America’s most popular cattle breeds—they have been for nearly two centuries!

As hereford cattles have several disadvantages, this often leaves people wondering why they are raised? Or what exactly are they used for? Let’s explore.

Hereford cattle have been bred to produce lean beef with high quantities of protein and low amounts of fat, making them popular choices for meat lovers and high-end restaurants around the world. Although they are known for their meat production, they are also known for producing milk for their calves

Having a short lifespan of hereford cattle is one of the disadvantages of raising them. This means that they tend to live shorter than other cattle. Let’s find out how long our hereford cow can live.

The average lifespan of a cow is 20-25 years, but Herefords live an average of 18-22 years. This varies depending on how they’re raised, however. Herefords that are used for dairy or beef cattle tend to live longer than other breeds because they have more opportunity to rest and graze outside in large pastures.

Herefords are hardy and well-suited to rough grazing conditions, but their large eyes make them susceptible to eye cancer. However, how herefords and eye cancer are interlinked is still unexplored, let’s find out.

One of the most significant disadvantages of the Hereford breed is that it has high susceptibility to developing eye cancer, which requires special care and attention from the animal’s owner in order to prevent the cancer from spreading to other parts of the body and eventually killing the animal.

Hereford cattle develop eye cancer twice as frequently as other beef breeds. The average age for cows with eye cancer is 3.3 years, which isn’t an uncommon life expectancy for a beef cow. These health issues cause problems when it comes to harvesting and transportation, which are not only expensive but can be dangerous for humans.

Hereford cattle, native to the English county of Herefordshire, have been known to grow horns since the 1800s. Their longhorns lead some people to believe the animals are not suitable for companionship.

Their horns are very long and curved at the tips, which has led some people to believe that they are the origin of the devil’s horns hand sign used by rock stars and football players.

Why Are Hereford Cattles Big? 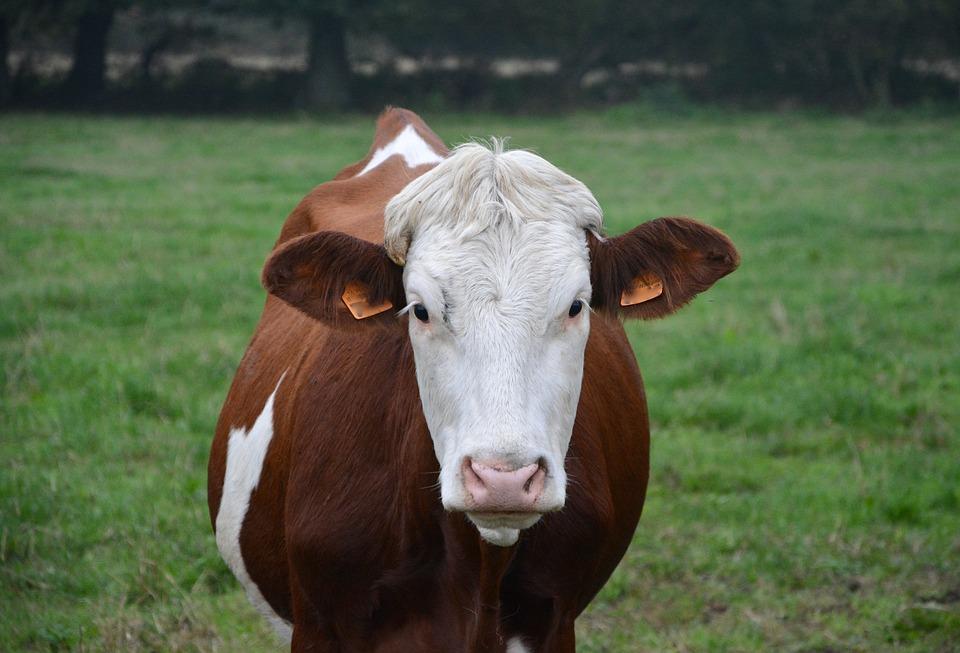 It is widely known that hereford cattle have a massive build, despite the fact that it is considered a positive trait, but their weight makes them difficult to handle.

Well, it turns out that their size has a lot to do with genetics. If you’re lucky enough to have one of these magnificent beasts in your backyard, chances are they’re 100% purebred, and therefore from a long line of big Herefords!

Don’t be surprised if your heifer calves exceed 3,000 pounds at birth and grow larger than any other breed in your area.

The Hereford breed tends to gain weight quickly, even when fed a strict hay diet. This makes it difficult for ranchers to handle these animals on the farm, hence farmers usually avoid working with them on farms.

Probably because of their various disadvantages, today, Herefords aren’t as common as they used to be. Many smaller farms and ranches have switched over to using other breeds of cattle—especially Angus cattle, which grow bigger and faster than most other cattle. Still, herefords remain a favorite among many large-scale ranchers in Texas, Arizona, and California.