Although, as an Indian, you must know that cows are sacred animals, do you know Brahman cattle are the sacred cattle of the Hindu religion? Not only this, they are an essential part of the American economy. Read below to know what characteristics make the Brahman cattle so desirable worldwide.

Brahman cattle are medium-sized cow breeds with distinctive characteristics, including a well-defined hump, dewlaps, and extra skin. Their thick glossy hair coats reflect much of the sun’s heat which makes them highly tolerant to heat and sunlight.

During its development in the 18th century, the Brahman breed originated in the USA from the offspring of four Zebu breeds.

The native cattle of tropical India have developed remarkable adaptations to survive in adverse conditions.

For instance, in conditions of poor food supplies, the existence of insect pests, sickness, and the extreme weather conditions of the country, which we will discuss in the latter part of the blog. 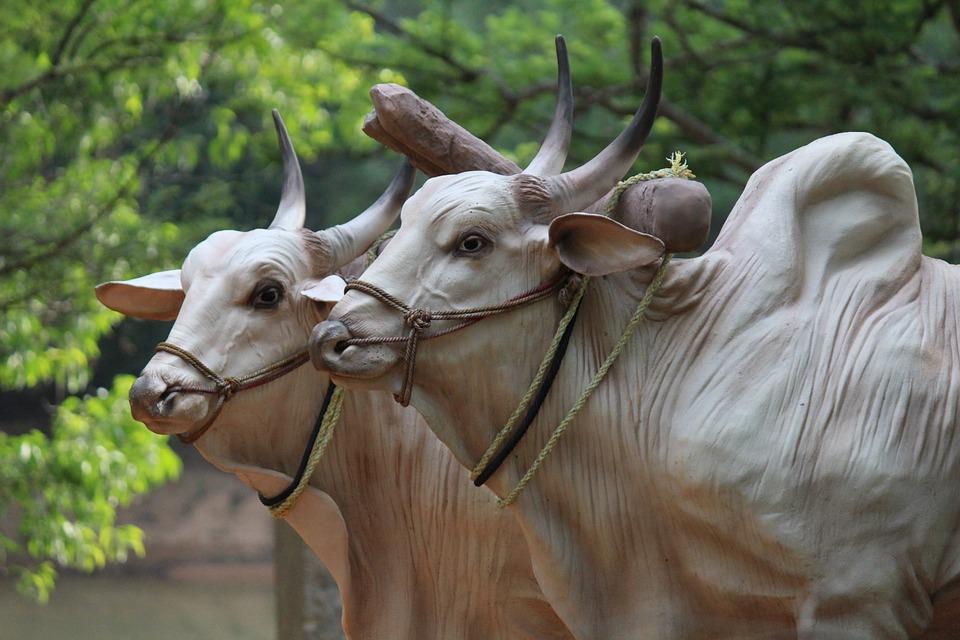 It is because of these unique physical characteristics that people are curious to learn about the Bahamas’ history and origin. Let’s discuss the history of Bahamas cattle in more detail.

Brahmans are descended from cows of the Bos indicus breed native to India.  To develop the Brahman breed of cattle, the Guzerat, Nelore, and Gir varieties of Indian cattle were used. 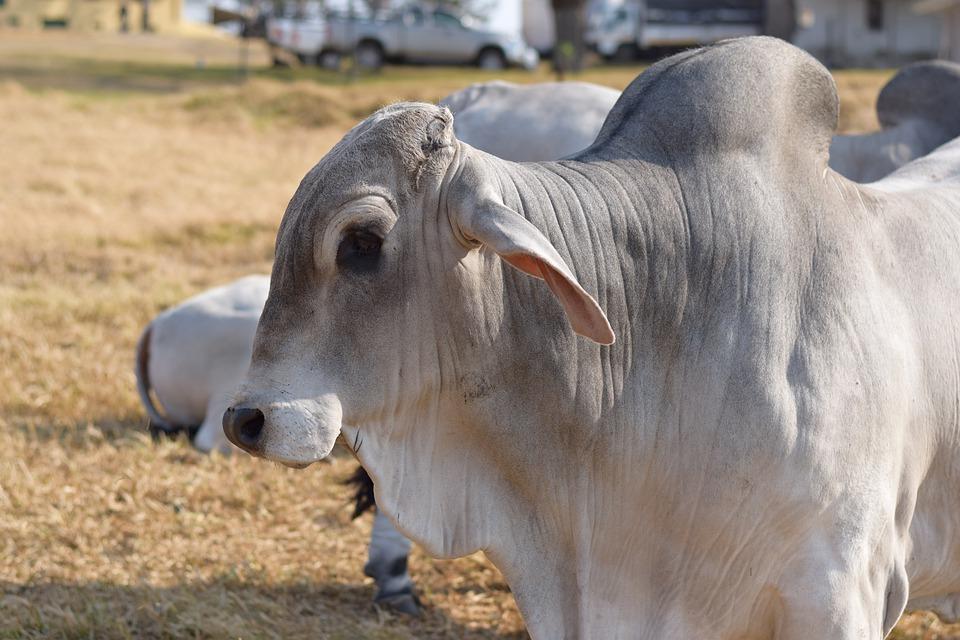 Brahman cattle are characterized by the large hump on shoulders which is usually more prominent in males. Cattles of this type are categorized as medium-sized with long heads and hanging ears. Generally, they are found in gray and red colors, but other hues such as brown, black, and white are also found.

Their prominent physical features also include manifold layers of skin on the body that helps them bear with hot temperatures. They also possess more sweat glands so that they can easily sweat.

The Brahman breed is a robust and hardy breed that tolerates heat, sun, cold, and humidity well. They have become cherished in so many nations around the globe because they can adapt to different climates.

For instance- In colder seasons, the Brahman can also grow a thick winter coat to protect them from the extremes of the weather.

In contrast to the widely held belief that brahman cattle are small animals, there is disagreement about their size. Some argue that they are small, whereas others still believe that they are large-sized animals.

Brahman cattle are medium-sized among beef breeds, although some, especially the bulls, can be pretty large. Also, calves are substantially small, but the size increases rapidly with age.

In dairy cattle, body weight plays an essential role in reproductive performance and, therefore, affects milk production; this might make you curious to know how heavy these beautiful creatures are. Let’s find this out.

Brahman bulls generally weigh around 1600 to 2,200 pounds, while cows weigh between 1000 and 1400 pounds. The calves, on the other hand, weigh approximately 60 to 65 pounds but grow rapidly compared to other breeds.

However, similar to any other cattle breed, the weight of the brahman cattle also depends upon various factors like age, health, nutrition, gender, heat or cold stress, and others.

For instance, cows with poor diet and lack of nutrition can be the important reason for their low body weight. Similarly, male cattle, i.e., bulls, are heavier than cows. 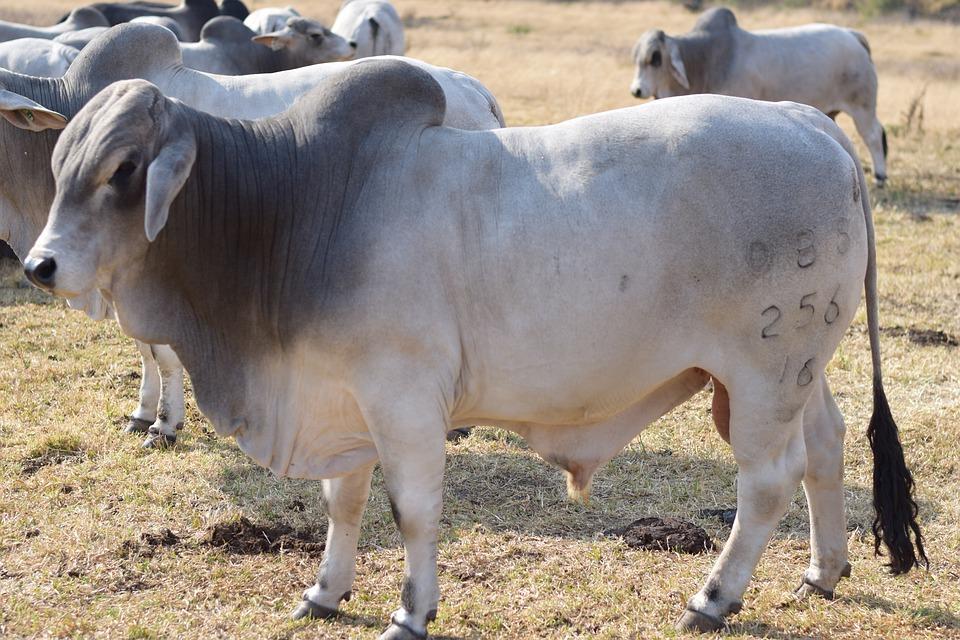 Brahman cattle are unique species in themselves, possessing several distinctive characteristics. Their coat color is one such thing that makes them even more attractive and unique.

The color of Brahman cattle ranges from very light gray to red. They are mostly light gray to medium gray in color. Adult bulls, however, tend to be darker than cows and usually have dark patches along their neck, shoulders, and thighs.

The black skin of a Brahman cattle is reflected beautifully in the sun by its thick, glossy fur, which makes it easily identifiable.

Also, as discussed above, since brahmans can grow thick coats in winters, this makes their light gray coats appear more on the darker side.

Brahmans have genetically-equipped skin that can withstand temperatures that are beyond their range, which makes them more heat-tolerant than most other breeds.

They are known for their heat resistance due to a thick, shiny hair coat that reflects the sun’s rays. They grow a long, thick coat covering to guard against the cold during the winter.

It is a distinctive feature of this breed to have a lot of loose skin. However, it has a practical advantage as it increases their surface area, allowing them to cool down more efficiently.

Cows are raised for a variety of purposes, but why Brahman cows are raised is still a matter of debate. Read on to learn some uses for Brahman cattle.

Breeding, meat production, and dairy production are the most common uses of Brahman cattle. Females have higher milk production than others and are less likely to decline when faced with adverse conditions. Their meat also has minimal fat.

They play an essential role in crossbreeding programs in countries worldwide due to their high performance and growth.

Compared to other breeds, Brahman females produce more milk, wean their calves faster, and are more reproductive; hence they are popular in the milk industry.

Breeders claim that the Brahman breed is highly adaptable and thrives in almost any environment. But is that true? Let’s find out.

Besides being able to use and maximize lower-quality feed, traveling for miles for feed and water, and resisting insects and external parasites- the Brahman are known to have significant environmental adaptability.

Not just males, it has proven that Brahman females can also adjust well to the environment. They reproduce well and produce large quantities of milk regardless of the environment. Even in stressful circumstances, they adapt and make the most of their surroundings.

How to Identify Brahman Cattle 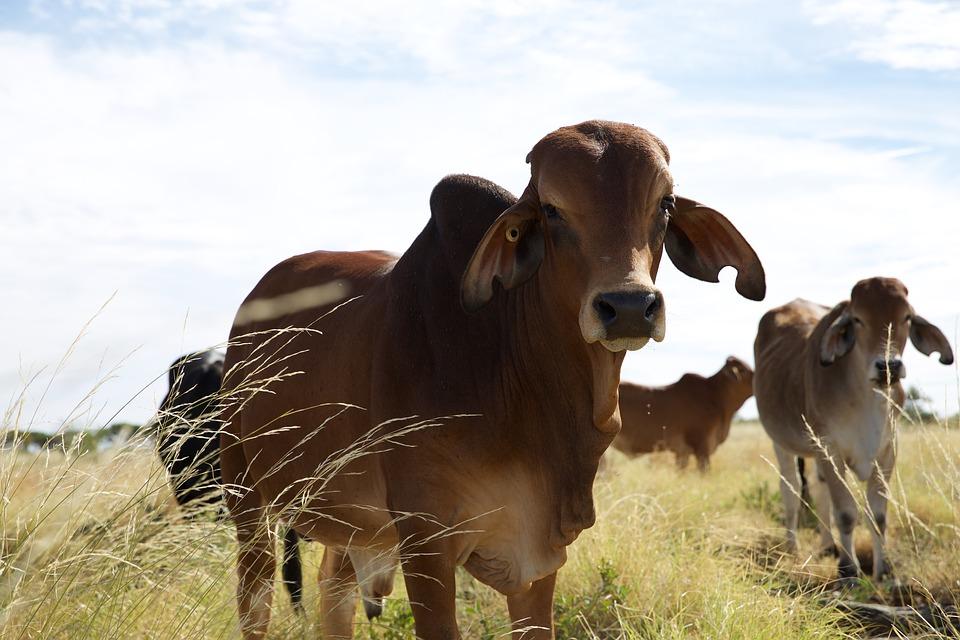 All cattle look similar at first glance, and so the most popular question among people is: how do you identify Brahman cattle? To do so, you should be familiar with their physical characteristics.

Brahman cattle can be easily identified by their physical and emotional characteristics like the hump on their bodies, their thick glossy fur, floppy ears and light shades, shielded eyes, intelligence, friendly nature, and shy personality.

Furthermore, brahmans can also be characterized by large upward-curving horns on their heads, as well as medium-sized heads and bodies. Apart from this, you can easily recognize brahmans by analyzing their behavior, for instance, their shy nature, curious personality, and friendly behavior.