Some mammals in the animal kingdom have developed horns as one of their most prominent and most impressive adaptations; however what’s inside it has ever been a matter of debate. Let’s figure this out.

The Inside and outside of horns are composed of various substances that assist them in serving different purposes. The horns of every animal differ in one way or another. Some animals have solid horns, some have hollow horns, and others have a combination of both.

The horns of animals are used in many ways. Some animals use horns as a defense mechanism against predators or to assert dominance among members of their own species. Horns are also essential for feeding in places like soil or decomposing leaves, which some animals with actual horns do. 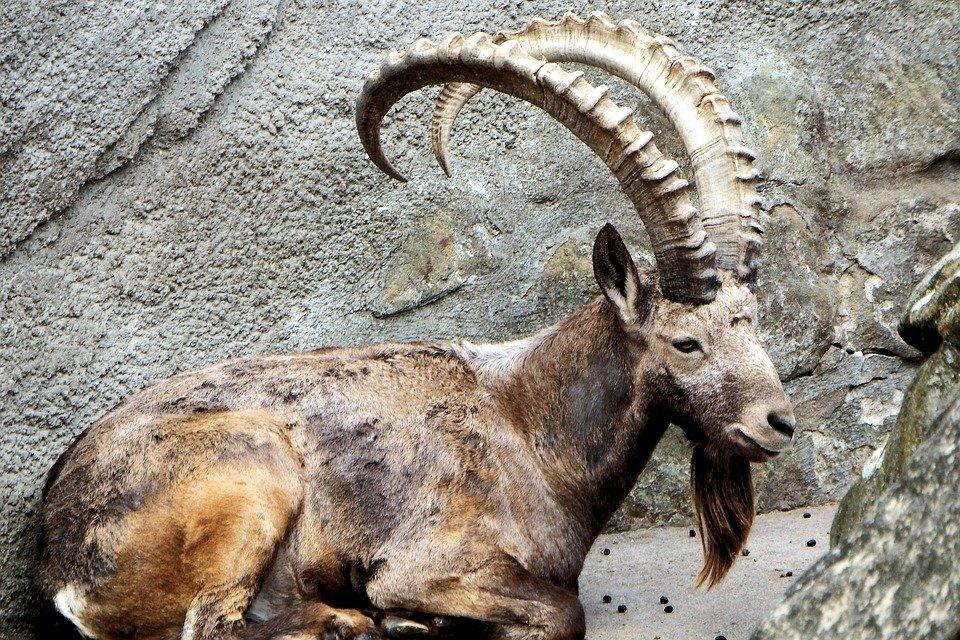 What are Horns Made From?

Have you ever been amazed by an animal’s long, thin horns and wondered if there are any bones or cartilages inside them? Or is it devoid of any substance? Let’s figure this out.

Horns are usually made from a bony core covered with a thin sheet of Keratin, the same substance that is in the fingernails and human hair. Except for rhino horns which are entirely made of Keratin, and there are no bony structures at all.

The antlers of animals such as deer, elk, moose, caribou, fallow, and reindeer, on the other hand, are not hollow and extremely tough. This is because antlers are usually composed of calcium, phosphorus, and even water to a certain extent, making them more dangerous than horns.

The development of an animal’s horns begins shortly after birth and continues to grow throughout its life. Let’s find out if they naturally grow hollow or not.

Since horns are supported by a bony structure covered with Keratin, it does not grow hollow. However, the horn sheaths are hollow once the Keratin has been removed from the bony core on the skull.

Can Animals Feel Their Horns?

Divergent opinions exist on this issue, while some people believe that their horns can’t be felt while others say that they can. This is why they spend most of their time sharpening them. Let’s unveil the truth.

Animals, especially cattle, can feel their horns. This is mainly because sensory impressions are transmitted to the horn by the corneal nerve, which runs behind the eye to the base of the horn.

However, animals like rhinos or rams cannot feel their horns because of this.

Since goats belong to the Bovidae family, their horns have distinctive shapes and sizes. Let’s examine whether goats shed their horns naturally or not.

Goats do not shed their horns naturally; in Fact their horns continuously grow as they age.

Besides protecting them from predators and attracting mates, the Fact that goat horns help regulate the temperature of goat’s bodies and help them stay cool makes their horns unique from other animals.

Are Horns Stronger than Bone?

Horns to defend animals. This leads people to believe that animal horns are more robust than their bones. But, is that true? Let’s figure it out.

Animals use horns as either to defend against predators or be used to fight within the species for territory or dominance, they are usually stronger than bones.

When encountered with predator attack, the horn is the only thing that acts as a line of defense for animals; thus, they grow naturally stronger. In Fact, researchers have found out that deer antlers are 2.4 times more formidable than wet bones.

How Fast do Horns Grow?

If you visit a dairy farm regularly, you may have noticed how quickly the cattle grow their horns in such a short period. Let’s find out at what speed do cow horns grow.

During the first six to seven years of a cattle life, she grows the majority of her horns. And during the feedlot phase, the length growth of each horn goes up to 7.5 cm with an average base growth of 3.2 cm.

Horn development begins at birth as a bud located in the skin. If the bud is removed but not the corium, horn growth will continue. In about 6 to 8 weeks, the horn will grow and attach to the frontal bone.

While horns are not as fast-growing as antlers, deer antlers are growing between one and two inches per week and continue to grow every day.

Do Horns Bleed When Broken?

The horns of animals often break due to various reasons, including fighting with predators or old wounds. But do the horns bleed when broken? Let’s take a closer look.

The Fact that horns are live bones means that broken horns will bleed heavily and cause intense pain to the animal and require medical supervision.

Are all Horns Made of Hair?

Not all horns are made of hair; it is just the rhino horns that consist of a cluster of hairs; this is because there is no bony structure present in their horns. The horn of other animals is a two-part structure with a bony core and does not contain hairs.

What Does the Inside of a Cow’s Horn Look Like?

If you have ever touched a cow’s horn, you must have felt the hard outer surface and wondered what would be inside it. In this article, we will help you understand what’s inside the horns of those lovely horns.

While the outer wall of the cow horn is made entirely of Keratin, Inside of a cow’s horn is made of corium and a solid bone. The blood supply goes up through the bone.

The horns of cows make them more capable of defending themselves and their young against predators, such as dogs and wolves. Let’s find out if their horns are hollow or not.

The cow’s horns could be hollow and are entirely made of Keratin, the same substance present in human hair and nails. In addition to the Keratin contained in cow horns, there is a small bone core in the middle of the horns, which is fused to the animal’s skull in front.

As per the famous saying, messing with goats and getting horns says much about how powerful and unique the goats’ horns are. However, what’s inside is still a matter of debate.

Horns of goats are composed of a central bony core that grows from the skull’s frontal bone. However, it becomes hollow after six months. Goat horns are entirely different from other animals as they are very sensitive and made of hair, blood vessels, and nerves.

While the exterior coating of goat horns is robust, solid and relatively insensitive, the interior is as delicate as the skin under the human fingernails.

It is a well-known fact that rhinoceros are known for having some of the most valuable horns in the world, more valuable than gold, diamonds, or cocaine. Let’s find out what’s unique in their horns or are their horns hollow or not.

Rhino horns are unique, however, because they are composed entirely of Keratin. The calcium deposits in the horn of rhino make the horn core harder and stronger than horns of other animals. Thus, rhinoceros horns are solid and are not actual horns at all.

Unlike other animals, which usually have a horn of bony core covered by a thin sheath of Keratin, rhino horns have no bony structure and are made entirely of Keratin and are made of solidified hair. The medicinal properties of rhino horns made them the world’s costliest horns.

The famous cattle breed of South Africa, watusi, is known for its huge, unique, and attractive horns. The inside of watusi horns is as impressive as the outer part. Let’s discover this.

Watusi horns are primarily hollow, containing various blood vessels that help them to overcome the heat of humid areas. Horns of watusi are approximately 26 inches and weigh around 8 to 10 lbs; this makes them most unique.

Their massive white-colored horns help them fight effectively with predators and help keep their bodies cool even in extreme weather conditions.

Among all animal species having horns, rams have unique spiral horns, having the broadest diameter. Let’s find out what is inside their horns that makes them so unique.

The outer ram horns are all made of Keratin, while the inside core of the horn is covered by bone that usually fills the hollow space left out by Keratin. Due to the presence of Keratin, they are extremely sensitive.

Buffalos are herd animals known for being the most fantastic set of horns. Let’s figure out what they are precisely made of.

Buffalo Horns are similar to Cattle Horns; hence they are hollow. Although the walls are thicker and the tip is solid, they are composed of dense layers of fibers with a hard, durable surface.

When given a high polish, the buffalo horn seems to have a rigid surface. It may well be one of the most rigid natural materials. Buffalo horn is almost always completely black, and the inner curve is quite heavily ridged.

Water Buffaloes have been awarded as the most prominent horn found with the size being 4.24m long from tip to tip. They top the list of animals with enormous horns.

The buffalo horn has a very hard and durable surface because it is made up of dense layers of fibres. Inside of the horn contains many health benefits.

What’s the Difference between an Antler and a Horn?

A layman often confuses antlers and horns as one and the same thing. However, both of them differ significantly. Let’s find out more about both of them.

To conclude, it is essential to note that every animal has a unique horn in terms of size, shape, or texture and distinctive properties; while some have hollow horns, others have more solid horns, as stated above.

Texas Longhorn Cattle were the first cattle introduced in the New World. Furthermore, this breed of cattle was the first to evolve without the use of humans. Although Texas Longhorns are raised for...

Continue Reading
link to Do Cows Cry: Why, When, How, Interesting Facts

Cows cry when they’re in distress or feel lonely. They go through complex emotions, much like humans, and experience sadness, fear, grief, and even joy. Usually, they shed tears and bellow when...